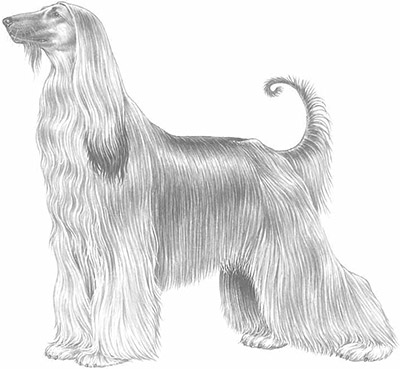 © M.Davidson, illustr. NKU Picture Library
This illustration does not necessarily show the ideal example of the breed.

Brief historical summary: The first Afghans arrived in Britain in the early 1900s and one, called Zardin, won in spectacular style at the 1907 Crystal Palace show in London. The breed is also known as the Tazi, supporting its resemblance to a Russian breed of that name. One of the typical sighthounds of the world, the Afghan - who, as his name implies, comes from the mountains of Afghanistan — is a hunter and will chase if given opportunity. Nowadays also a glamorous show dog which must combine strength and dignity with a long, silky coat as well as having an Oriental expression.

Behaviour and temperament: Eastern or Oriental expression is typical of breed. The Afghan looks at and through one. Dignified and aloof, with a certain keen fierceness.

Tail: Not too short. Set on low with ring at end. Raised when in action. Sparsely feathered.

Limbs:
Forequarters:
Shoulders: Long and sloping, set well back, well muscled and strong without being loaded.
Upper arm: Long and sloping.
Elbow: In profile vertically below the withers. Close to rib cage, turning neither in nor out.
Forearm: Forelegs straight and well boned.
Metacarpus (Pastern): Long and springy.
Forefeet: Strong and very large both in length and breadth, and covered with long, thick hair; toes arched. Pads well down on ground.

Gait / movement: Smooth and springy with a style of high order.

Coat:
Hair: Long and very fine texture on ribs, fore and hindquarters and flanks. In mature dogs from shoulder backwards and along the saddle, hair short and close. Hair long from forehead backwards, with a distinct silky «top-knot». On the foreface hair short. Ears and legs well coated. Pasterns can be bare. Coat must develop naturally. Any evidence of clipping or scissoring should be penalized.
Colour: All colours acceptable.

Faults: Any departure from the foregoing points should be considered a fault and the seriousness with which the fault should be regarded should be in exact proportion to its degree and its effect upon the health and welfare of the dog.

* The latest correction is highlighted.